I should change communication region to execute rtems with jailhouse.

I change communication region base to 0x900000
at inmate.h :

And I reserve 0x900000 for communication region at each example demo file for test.
apic-demo.c :

It is executed successfully. So I checked patched rtems whether it reserves 0x900000 for communication region.

but I cannot find that. Gedare Bloom said :

I believe RTEMS stays in real mode, and we do not have any MMU supportcode in place. One thing to check is the "memory map" of the linkedexecutable in startup/linkcmds, which specifies how the ELF file isloaded into memory. The mentioned address should be reserved forsomething, or else it would possibly get assigned to another area andyou may have some data corruption problem.

I should check linkcmds to reserve communication region.

Posted by Unknown at 8:00 PM No comments:

Introduction and Project idea
Jailhouse and RTEMS are open source project.
Jailhouse(https://github.com/siemens/jailhouse) is Linux-based partitioning hypervisor.
initial version of Jailhouse developed x86 BSP. RTEMS also support x86, RTEMS can be easily as Jailhouse “inmate”. But Jailhouse needs required step for porting. The project aims to Integration, Merging, Fixup of existing support for Jailhouse and port support for other architectures (ARM). Other specifics of the project can be obtained from my proposal.

Status of Work Done
the work is divided into 2 part of bsp and starting jailhouse. And the individual bsps have 4 steps for being patched. 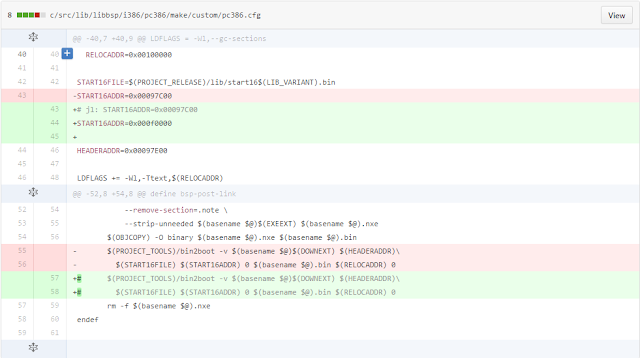 jailhouse doesn't use local segment descriptor and A20
start16.S : 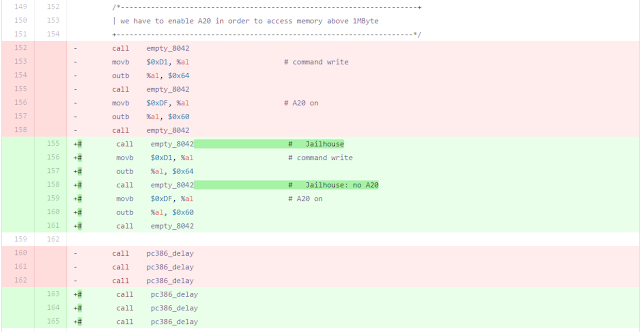 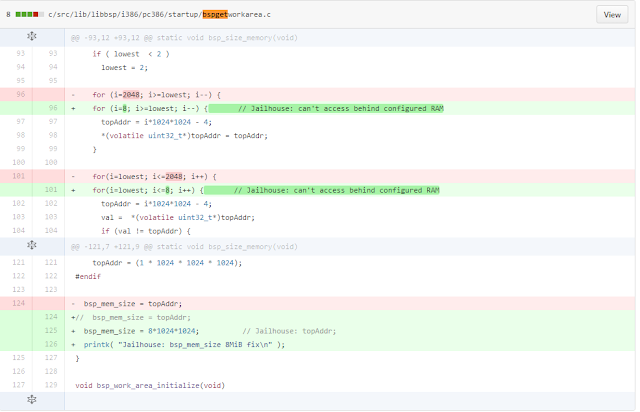 (b) change pci port
jailhouse only uses polled serial 1 and use 115200 baud rate. 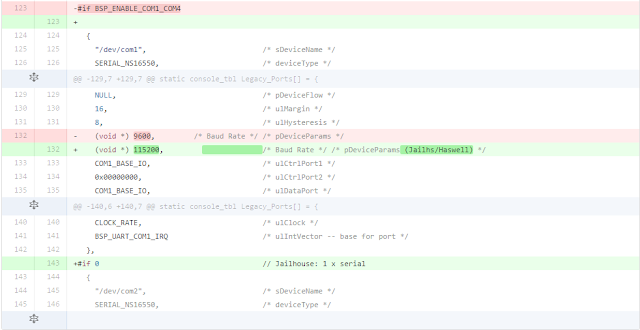 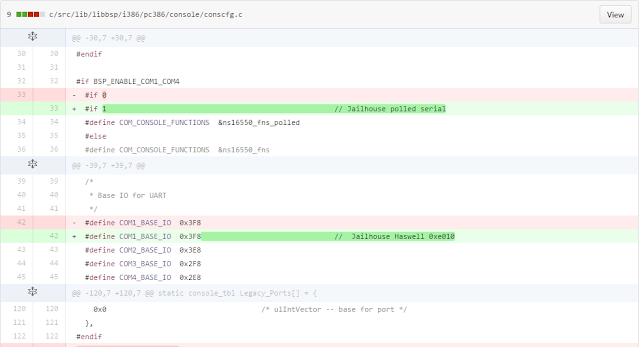 (c) change lagacy pic(8259a) to apic(x2apic) to support timer and network.
Jailhouse non-root cells must use the xAPIC as minimum but should usethe x2APIC for best performance. When wanting to use x2apic, you need to enable it in the APIC BASE MSR. The BIOS may or may not have done this already on real hardware. Jailhouse behaves like a BIOS here in that it does enable x2apic when Linux was using it as well. So you just leave the APIC BASE MSR untouched and can even access the APIC in both ways then (memory mapped or via rdmsr/wrmsr) - Jailhouse maps one on the other.

in irq.c : you should remove all lagacy pic control things and add ioapic like 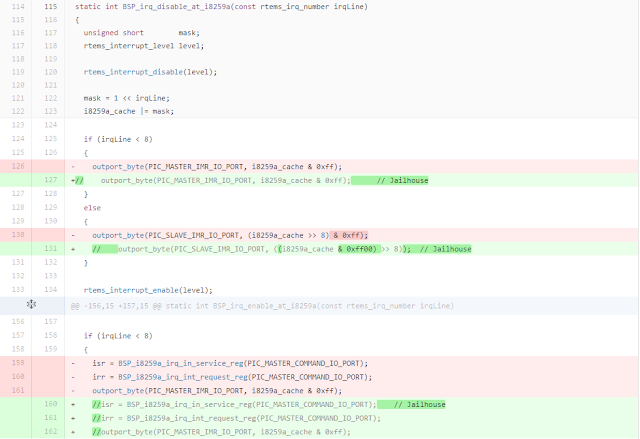 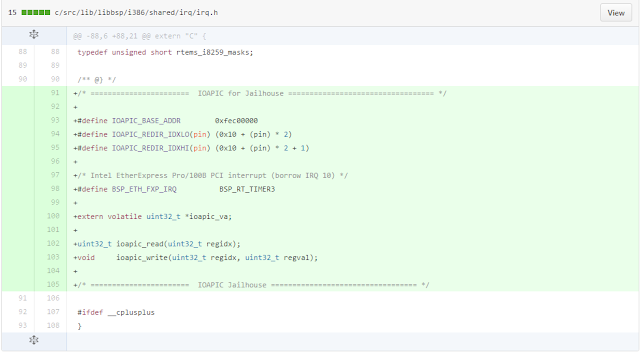 The workflow
The workflow in this project is important because you allow sufficient hardware support to execute jailhouse on qemu. When it comes to hardware spec to execute jailhouse successfully, you should use latest linux on native not vmware or qemu and latest version of qemu. For porting apic to RTEMS, latest qemu is required. A detailed explanation of this follows

in my proposal, I would use rtems-4.11 to execute patched rtems on jailhouse. bacause master rtems has lots of different with rtems-4.11, I change my workflow to patch master rtems.

there are many changes. rtems-4.11 uses 8259s pci but master rtems uses 8259a. cpu.h is removed. clock timer functions are changed.

in pcibios.c of patch files, many functions are changed but master rtems use already same codes alread changed.

I wrote a instruction at this blog before.

jailhouse is still being developed. when you execute qemu with kvm options, there are different between when I executed jailhouse 2 month before and now. you can use iommu, intremap=on by using qemu 2.7.0-rc3. then you can see all of specifications is satisfied distincted from not using iommu,intremap=on.

I wrote a instruction at this blog before.

I am still working to execute rtems as inmate on jailhouse.
I am modifying jailhouse inmate/lib files to change communication address for rtems.
( 0x100000 to 0x900000 )

Thank you for patient reading.

refactoring patch files and where rtems should be modified for jailhouse.

And I should write test code to test whether patched rtems works successfully.

I add jailhouse BSP variant. instead of modifying the make/custom/pc386.cfg file (patch 0001), a new jailhouse.cfg would be added that sets the build rules as needed for jailhouse.


3. timer ( select timer and calibrate )
I also add local apic timer option for clock driver. There appears to be conflicting definitions for some of the APIC macros between libbsp/i386/shared/irq/apic.h and the changes made for jailhouse.

because jailhouse non-root cells must use the xAPIC as minimum but should use the x2APIC for best performance, I add local apic option to use x2apic.

I am writing test code divided into three stages.

Posted by Unknown at 6:09 AM No comments:


when I started to load rtems to cell, I asked about loading rtems to Jan and I got a email.

you need to load the .bin of your RTEMS build into the inmate memory
apparently, there is the need for a loader in addition
if running over KVM, find the binary attached (still looking for the sources)

The email had a loader file for loading rtems to jailhouse.

I should select a address for rtems when I load a rtems file to cell.

JAILHOUSE_CELL_LOAD: Invalid argument
I found that I get a error when I load wrong address.

So I also asked Maxim who wrote a jailhouse paper.
He said

Hello!
Usually, this error appeared when binary which you load into cell is bigger than the memory region in your cell's configuration. So, firstly, try to check if memory regions in your cell configuration are big enough. Binary must fit into one of your memory regions (considering the offset which you specied with -a option; so, offset+size of the binary must be smaller than the memregion). Jailhouse does not do more sothisticated checks than this size check.
When I ported the Fiasco, it was needed to tune memory regions in the fiasco's cell (and also check if nonroot cell's memory does not interfere with root cell's memregs).

I hope this simple idea will help. If you have some other questions I would be happy to help you.

As his advice, I will try to change a config file memory setting.

Posted by Unknown at 2:53 AM No comments:

About mid term evaulation of GSoC

1. Planned progress vs. real progress according to the original project plan.
> planned progress for mid term is to show demo executing rtems as jailhouse "inmate" on x86 with appropriate tutorial to guide users.

> real progress
write tutorials how to build jailhouse, how to execute jailhouse cell and how to build patched rtems for jailhouse.
Next step is to execute rtems as jailhouse "imate". I should write a config file for rtems about executing jailhouse cell.
2. In case there is a divergence from planned/real, then what are the reasons?A config file is needed to execute rtems as jailhouse "inmate".
When I started the project, mentor said that he was collecting materials about existed rtems demo. But after building rtems and jailhouse, I need to write a config file for rtems demo.
3. Updated plan for the second half of the GSoC period.There is little difference but planned progress would be completed at the end.
4. Code produced so far.Not thing. But I completed patching rtems by mentor's patch files.
5. What are the current blocking points?I am studying about how rtems boots for writing a config file.
6. What is realistic to achieve finally?As I suggested, I will also show RTEMS demo as jailhouse "inmate" on arm and write a documentation for users.
7. Which external help do you expect.
To execute jailhouse on arm, I need a bananaPi board. could you support about buying bananaPi board?

Posted by Unknown at 2:41 PM No comments:

How to build patched RTEMS for Jailhouse

If you want to make a rtems cell for jailhouse, you should patch rtems.

I got five patch files from Jan Kiszka. ( jan.kiszka@siemens.com )
The patch files are involved with apic, ioapic, pic, memory etc for jailhouse to support rtems.

If you use rtems-source-builder master, you would get some error when you install i386-rtems by sb-set-builder.

Joel Sherrill will clone RTEMS for this old version issue.

And then, you can use hello.bin for jailhouse in testsuites.

Now I am writing config file for jailhouse to create cell for rtems.
Posted by Unknown at 10:51 PM No comments:

How to build Jailhouse on Intel host

Until I set up Jailhouse starting cell, I underwent trial and error.
Actually, There are many instructions at Jailhouse Github, articles and google group. If you use AMD host, check instruction at jailhouse github.

Check your host that support VT-d and VT-x and 4 cores.

It requires latest Linux distro and QEMU, kernel to patch guest and Jailhouse.

after starting QEMU and installing Ubuntu for QEMU guest, change your CMDLINE_LINUX at /etc/default/grub.

If you get error, join Jailhouse google group.
There are talks about error.
If you don't get error, you can explore Jailhouse.

Posted by Unknown at 6:11 AM No comments: